Smith Anderson attorney Richard Stevens is the recipient of the University of North Carolina’s General Alumni Association’s (GAA) first Tony Rand and Tom Lambeth Advocacy Award for his “extraordinary” support of policies that benefit the GAA and UNC. 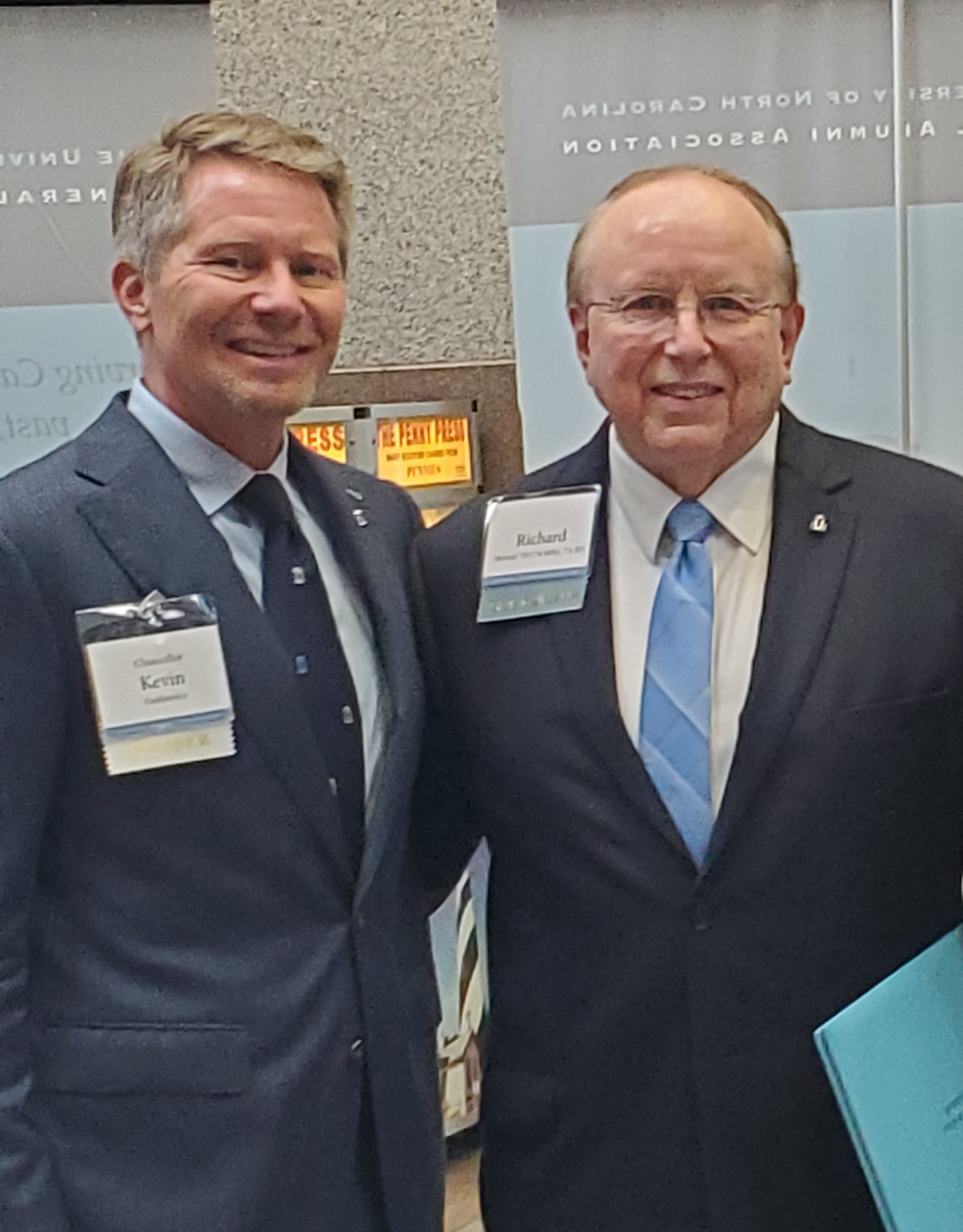 Richard, a former N.C. state senator, earned his J.D. from UNC in 1974 and Masters of Public Administration from the university in 1978. His long resume of contributions to his alma mater include serving as chair of the UNC Board of Trustees for two of his three terms on the board and chairing the GAA Board of Directors, as well as serving as the association’s treasurer for a decade. He also chaired the Carolina Club board of directors and served on the GAA Task Force, which identifies areas of significant concern to UNC alumni. He chaired two chancellor search committees, which led to the selections of James Moeser and Kevin Guszkiewicz (pictured left with Richard).

“The award is named after Tony and Tom based on their leadership in the GAA as well as their leadership on policy issues impacting the University,” said Dana Simpson ‘96, former chair of the GAA and partner at Smith Anderson who serves as counsel to the GAA. “The award winners are likely to come from the ranks of legislators, executive branch officials, university leaders and others involved in advocating for public policies that help the university.”

Richard grew up in Raleigh, but the Carolina Blue spirit soars within him. During high school, UNC was the sole university to which he applied, Carolina Alumni Review reports. He knew he wanted to go to law school, and, in his view, Carolina had the best. An entire room of his home is a shrine to UNC; his wedding gift to his wife, Jere, was a lifetime membership to the GAA and a Carolina License plate, which he affixed to her car.

Among his many awards, Richard received the GAA’s Distinguished Service Medal in 1994. UNC honored him with the William Richardson Davie Award in 2010 and the Distinguished Alumnus Award in 2017. Richard received the Tony Rand and Tom Lambeth Advocacy Award on June 1, 2022, at the annual Legislative Reception at the N.C. Museum of History, hosted by the GAA Tar Heel Network, which advocates for policies supporting public higher education, particularly UNC.

Richard joined Smith Anderson in September 2012 after serving as a senator in the North Carolina General Assembly since 2003 and was named the senate’s third most effective member by the nonpartisan North Carolina Center for Public Policy Research. Richard’s practice focuses on government relations and contracts and land use and zoning.

Read more about the award here.