Smith Anderson partner and U.S. Colonel (Ret.) Kirk G. Warner recounts his war-theater observations as a Judge Advocate General (JAG), at the highest levels of the Army and the Coalition, throughout the liberation and occupation of Iraq in the newly-released book, Zone of Action: A JAG’s Journey Inside Operations Cobra II and Iraqi Freedom. Zone of Action is a senior Army JAG’s firsthand account of leadership, tragedy, major combat operations and the nation-building beyond – told by Kirk who served in a variety of roles inside the Coalition, Third Army and V-Corps during the march to Baghdad and in Iraq. 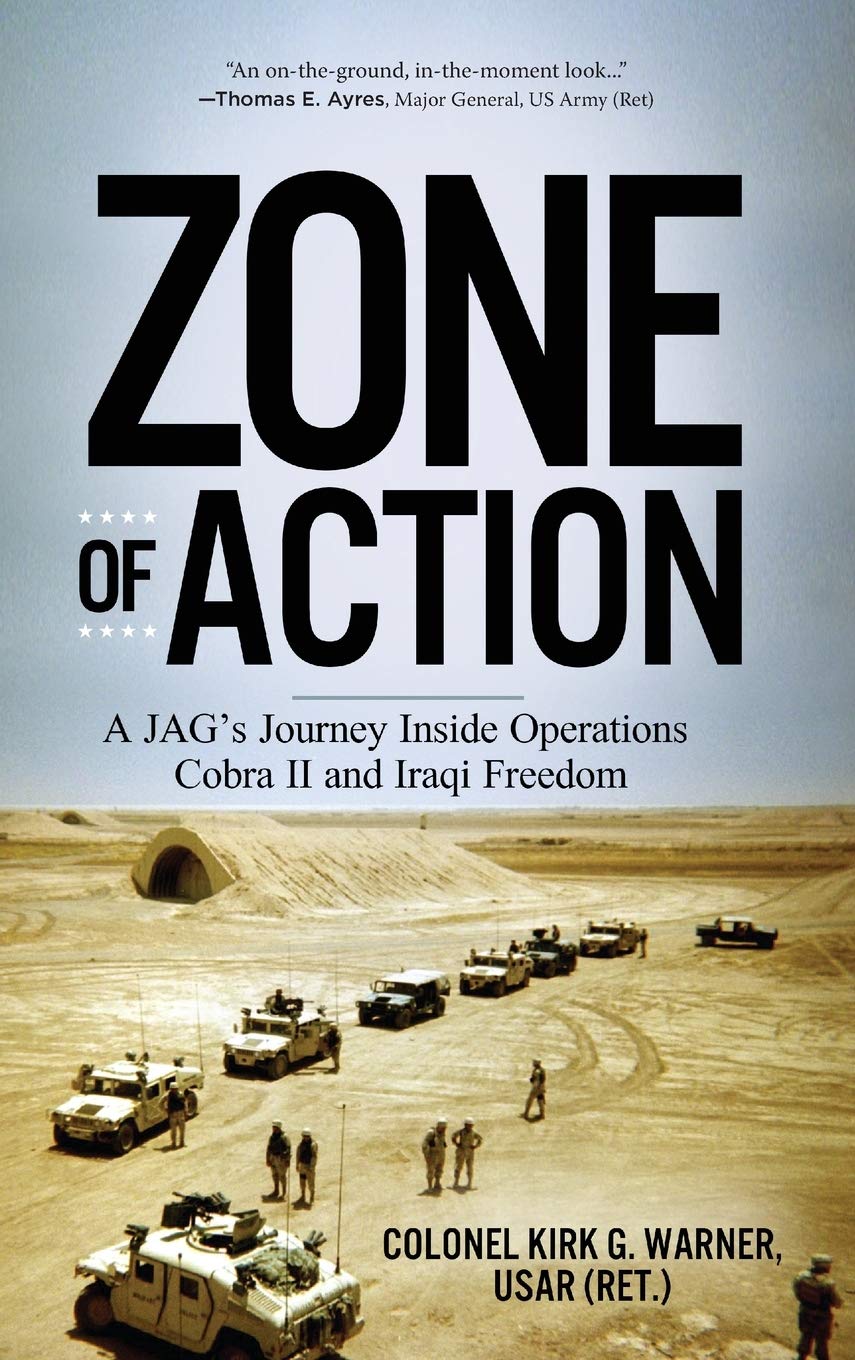 “Prepare to journey back in time to the Invasion of Iraq from an unusual vantage point,” said Patrick K. O’Donnell, historian and bestselling author of "Washington’s Immortals;" "The Unknowns;" and "We Were One." “A priceless and the only published account of Iraq's invasion and occupation from a JAG's perspective, O’Donnell also shared.

Zone of Action details Kirk’s official and inner journeys and those of soldiers and Iraqis encountered along the way, in which he documented by way of weekly war chronicles, shared with the home front and followed nationwide by top governmental and military leaders. It shows the character of American soldiers and leaders . . . and the occasional lack thereof, and it reveals the sacrifice of many unsung heroes. Above all, Kirk’s book is an honest, often humorous journey through war by someone deep in the arena.

After returning from the war, Kirk became deputy legal counsel to three Chairmen of the Joint Chiefs of Staff and Staff Judge Advocate to a national command. In addition to his 33 years of military experience as a JAG, Kirk is an experienced trial lawyer focusing much of his practice on complex product liability and commercial bet-the-company litigation. He has investigated, litigated and tried cases throughout the United States in all levels of trial and appellate courts and has also served as lead counsel nationally, regionally and statewide to multiple automotive and consumer products manufacturers.

His career includes numerous accolades from leading legal publications, prominent leadership roles serving on professional and community organizations, as well as military committees and veterans organizations – including being a driving force behind the creation of Veterans Treatment Courts throughout North Carolina. Kirk spends countless hours dedicated to military and veterans’ affairs and professional affiliations, including founding the NC Bar Association’s Military and Veterans Law Section and serving as a long-time Director of the USO of NC, member of the NC State Bar’s LAMP Committee, and Commissioner on the North Carolina Military Affairs Commission.

“An on-the-ground, in-the-moment look – not from the battle-front but from the decision-makers tents and palaces. At times comical, Kirk’s experiences show the myriad of issues Judge Advocates face in the zone of action, providing fascinating insight into the tactical, strategic and even political features of modern combat.” -Thomas E. Ayres, Major General, U.S. Army (Ret.), Former Deputy Judge Advocate General of the Army

“Zone of Action captures the unique vantage point of a mobilized JAG providing counsel and guidance to a variety of senior commanders and officials, both coalition and Iraqi. Col. Warner pulls no punches and shares a compelling account of the intersection of the rule and role of law in modern combat.” -James B. Mallory, Major General, U.S. Army Reserve (Ret.), Former Deputy Commanding General, NATO Training Mission – Afghanistan and Commanding General, 108th Training Command

“A marvelous book about the invasion and occupation of Iraq. Col. Warner and his Reserve lawyer cohorts were a critical part of the Coalition invasion force that brought Saddam Hussein and other criminals of the former regime to justice and, through the disciplined use of force, brought justice to many other enemies of peace. His first-person observations are a must-read account for anyone interested in what really happened in the first year of the war, and in what military lawyers do in combat.” -Marc Warren, Colonel, U.S. Army (Ret.), Former Staff Judge Advocate, V-Corps and CJTF-7 (Iraq)

“From battle preparation and targeting constraints, through mishaps and investigations, to identifying War Criminals, to Prisoner Operations of all types and sizes, to efforts to rebuild the Iraqi Courts and Judicial System, and loads of legal challenges in between, Col. Warner provides a serious recounting, tempered with a Soldier's humor, on the essential role of his Judge Advocate Team supporting Commanders and Troops." -Dan Wright, Major General, U.S. Army (Ret.), Former Deputy Judge Advocate General of the Army

“I absolutely loved this book! An entertaining insider report from a man in the arena and about everywhere else in the war rooms, courtrooms and streets of Iraq. I was not able to put this book down as the insightful and witty fact-based stories and observations kept coming.” -William S. Busby, Major General, U.S. Air Force Reserve (Ret.), Former Commander, 455 Expeditionary Operations Group, Bagram Air Base, Afghanistan

Zone of Action was released August 24, 2020 and is available for purchase on Amazon and other on-line sources. For more details, www.kirkgwarner.com or Koehler Books.

Koehler Books works with authors throughout the United States and around the globe. The company has published nearly 800 print and eBook titles in multiple fiction and non-fiction genres. Koehler’s more than 400 authors have won scores of literary awards, and their books have ranked as category best sellers on Amazon. In 2017 Koehler Books won the IngramSpark Ignite Award for Best in Publishing.