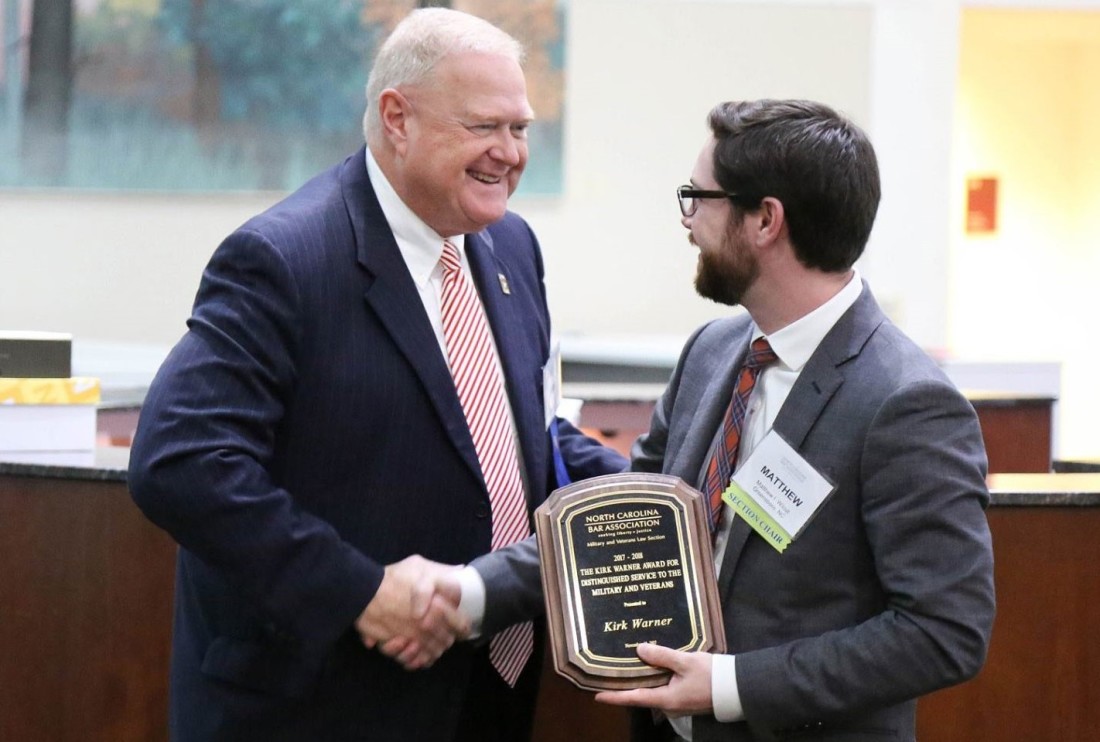 At the North Carolina Bar Association’s (NCBA) Military and Veterans Law Section annual meeting, Smith Anderson partner Kirk Warner was recognized with an award named in his honor, the Kirk Warner Award for Distinguished Service to the Military and Veterans. The NCBA published the article, “Military/Vet Lawyers Honor Warner,” and mentions the award recognizes an individual who has provided not only outstanding service to military members and/or veterans, but who also promotes the same in others by their devotion to selfless assistance to those who are serving or who have served in the Armed Forces of the United States.

“I was absolutely shocked and humbled by the section for even thinking of naming an award after me, let alone receiving it,” Kirk said. “I only accept it on behalf of all of those who are serving us…. Our entire focus and mine is always to take care of the soldier, seaman and airman standing post for us.”

Kirk’s own military service inspires his devotion to military and veterans’ affairs. After serving 33 years in the U.S. Army and Army Reserves, he retired from the Judge Advocate General Corps with the rank of Colonel in 2013.

“Three years ago, when this was conceived as the Military and Veterans Affairs Committee, there was a lot of enthusiasm for it,” Kirk added. “That has been borne out by it growing exponentially to becoming a full-fledged section, which amplifies its ability to serve the needs of our veterans and serving military and their families.”

“This is really exciting to see; it is an amazing start for a group of folks who are so well-intended,” Kirk added. “We went from crawling to walking, and now we’re running!”

In addition to his professional and community affiliations, Kirk heads Smith Anderson’s Products Liability practice group and is a senior litigator on the firm’s Commercial Litigation team. He provides legal counsel to CEOs, Corporate Executives and Boards.

Read the more about the Kirk Warner Award for Distinguished Service to the Military and Veterans in the full NCBA article here.