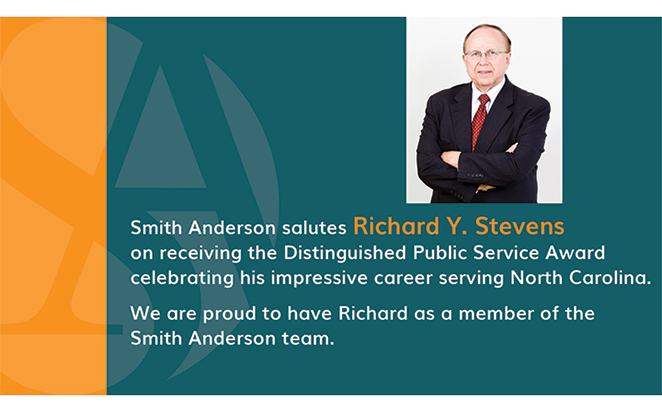 Smith Anderson’s Of Counsel lawyer, Richard Stevens, was awarded the Distinguished Public Service Award Monday, March 27th at the NC Chamber’s 75th Annual Meeting in recognition for his significant contributions to North Carolina’s economy and life of the state.

Giving back is one of Richard’s defining characteristics and the impact of his meaningful career is best told through the words of others. His philosophy of “passing it forward” is made evident through the unofficial “Richard Stevens Alumni Network,” comprised of dozens of professionals across the country who attribute their success to Richard’s mentorship.

Smith Anderson Partner Dana Simpson told the NC Chamber, “Those of us fortunate enough to call Richard a mentor will forever be grateful for his unwavering loyalty, encouragement and wisdom in helping us succeed in our careers. His willingness to give back to others and pass it forward to the next generation will be an enduring part of his tremendous public service legacy.”

Richard joined Smith Anderson in September 2012 after serving as a Senator in the North Carolina General Assembly since 2003. An attorney and management consultant, Richard was Manager of Wake County from 1984 to 2000. He also served as Assistant Wake County Manager and held numerous positions with the City of Durham, including Director of Finance and Assistant City Manager.

Richard’s commitment to public service has laid the groundwork for a prosperous North Carolina in the years to come.