Caryn will be the fifth Smith Anderson partner to serve as president of the NCBA, following most recently Martin H. Brinkley (2011-12) and John L. Jernigan (1999-2000). 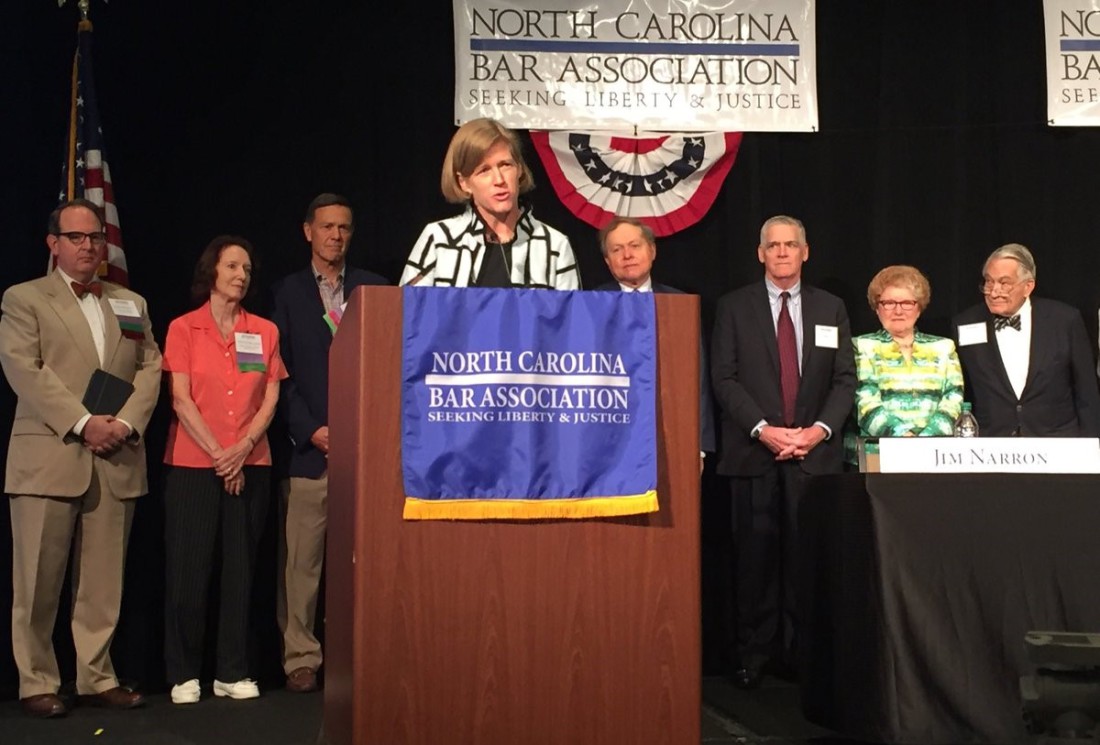 “The firm is pleased to support Caryn as president-elect of the North Carolina Bar Association,” noted Gerald Roach, Smith Anderson’s managing partner. “Her service to the community and profession embodies what it means to be a lawyer. Her leadership will serve the Bar Association and the broader community well,”

A Potomac, Maryland, native, Caryn, 49, attended the Holton-Arms School in Bethesda, Maryland. She received a B.A. degree with honors in English from Davidson College and her J.D. degree from Duke University.

Caryn leads Smith Anderson’s Employee Benefits and Executive Compensation Practice Group. She regularly advises public and private companies on all aspects of the design, implementation and administration of employee benefit plans and executive compensation arrangements, including stock option plans and other types of equity-based compensation arrangements. A significant part of her practice is devoted to counseling and negotiating on behalf of clients in connection with mergers and acquisitions.

Caryn has an extensive record of service within the NCBA. She served as chair of the Young Lawyers Division in 1999-2000, and is also a former division director and ABA YLD District 9 representative. She served on the NCBA Board of Governors in 2001-02, is a former member of the Tax Section council, and previously chaired the Lawyer Effectiveness & Quality of Life Committee and the Pro Bono Strategic Planning Task Force.

In 2007-08, Caryn co-chaired (with Smith Anderson attorney, and now Dean of the University of North Carolina School of Law, Martin Brinkley) the Bar Association’s inaugural “4All” Campaign to address systemic problems in the availability of legal services to North Carolinians living in poverty. In 2009, the 4All Campaign received the American Bar Association’s Harrison Tweed Award, which honors state and local bar projects that improve access to legal services for indigent citizens.

Caryn has also served as vice president and executive committee member of the Carolinas Chapter of The ESOP Association, and is a member of the National Association of Stock Plan Professionals, the Triangle Benefits Forum, and the Montreat President’s Council. Caryn is completing her first year as chair of the Ravenscroft School Board of Trustees. She joined the board of trustees in 2010 and is the first woman to serve as chair in the school’s 156-year history.

In addition to serving as president-elect in 2016-17, Caryn will chair the Audit & Finance Committee of the NCBA and the NCBA Foundation. She will be sworn in as the 123rd president of the NCBA on Saturday, June 24, at the 2017 NCBA Annual Meeting in Asheville.

Caryn and her husband John McNeill have three children: Johnny (18), an entering freshman at Sewanee: The University of the South, and Alex (14) and Jane (10), both students at Ravenscroft School.

The North Carolina Bar Association, founded in 1899, is the oldest and largest voluntary organization of legal professionals in the state. It is composed of more than 19,500 lawyers, law students and paralegals

Founded in 1912, Smith Anderson has grown to become the largest business and litigation law firm headquartered in the world-renowned Research Triangle region and one of the largest in North Carolina. We provide a full range of legal services to a diverse and dynamic group of regional, national and international companies. Over 100 years of practicing law has grounded our Firm’s culture, informed our perspective, and provided us the insight necessary to help our clients succeed. Over time, our core principles have remained unchanged. We remain personally dedicated to the success, prosperity and betterment of our clients and the communities we serve.